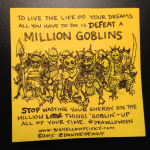 To live the life of your dreams, all you have to do is kill a million goblins.

This may or may not be a new concept to you, based on whether or not you’re following my new project over at BigYellowSticky.com. Even if you did see the original image I shared on that site, I wanted to add some context to what inspired the cartoon and quote I drew on the Big Yellow Sticky note a couple days ago. 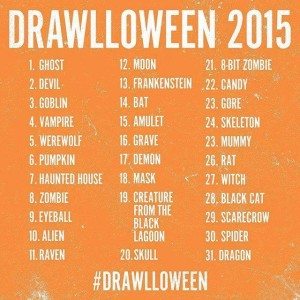 October gave rise to a daily content creation project for the creatively-inclined called #Drawlloween. Everyday this month a daily challenge is posted, and everyone interested in participating is asked to create piece of visual art based on the Halloween-themed keyword. When it’s over, everyone will have 31 days of original artwork. I’ve participated in daily challenges before, and they can be fun.

Trouble is, I’ve already committed to creating a daily piece of art over at BigYellowSticky.com. In an effort to up the ante on my own BYS challenge and meet the requirements of #Drawlloween, I decided to merge the two projects. So, everyday in October my posts at Big Yellow Sticky will be theed on the #Drawlloween keyword. It’s actually made the BYS creation process even more fun for me!

I started out by drawing an army of goblins 3″ wide and the concept immediately popped into my head. The little goblin army seemed fierce and overwhelming, but when it came right down to it those goblins were tiny little snarling and mean things that were more an annoyance than life-threatening. This made me realize the same is true for so many things in my life (and probably in yours as well.)

Cruel little monsters to which we give too much undeserved power and influence.
Discourteous and unskilled drivers during the morning commute, rude servers at restaurants, slow WIFI connections, glory-grabber managers and snarky co-workers, that jerk who parked in the handicapped space, etc.

Then we have our personal goblins:
Procrastination, tardiness, that pile of dishes in the sink, the stagnant gym membership, poor eating habits, wasting time on Facebook, Snapchat, Netflix, Hulu, etc.

It’s not that these goblins are big and powerful, it’s that they are so tiny and inconsequential that we don’t notice them at first. They creep in from the edges and stay out of our peripheral vision, and we allow them to breed and increase their numbers instead of squashing them while they are still too few to be troublesome.

All that stands between you and getting what you want is one million tiny little battles that you need to win.

All that stands between you can success is a bunch of whiny, growling, mewling, pathetic goblins.

To live the life of your dreams, all you have to do is kill a million goblins.

To help psych you up for battle, I shared a video below of the most epic goblin battle ever filmed — a scene from Labyrinth starring Jennifer Connelly and David Bowie (complete with music from the official soundtrack.)

Just An Idea Blab.im Ideas for Sales and Marketing

Getting Customers To Heed The Call To Adventure

I find a lot of parallels between ideas, sales, and what is known in writing as The Hero’s Journey. The Hero’s Journey was a concept shared by Joseph Campell, a professor in literature who primarily worked in comparative mythology and religion. Campbell identified a common story arc containing multiple stages that runs through every compelling […]

I was recently watching a series on Netflix called The Spy. It’s based on the life of Israeli spy Eli Cohen and it’s a riveting, suspenseful series — but this post is about a quote within the movie that I found particularly interesting about plans and making mistakes. The following line is uttered by Eli’s […]

Advice For Getting Started As A Sales Coach

A friend of mine recently reached out on LinkedIn and told me that after a long career working inside a single company as a business development manager, their position was being eliminated. With more than 25 years of experience in coaching salespeople, one of the options they were considering was launching their own consultancy as […]

What kinds of ideas are you looking for?

Cool Stuff For You